We would like to celebrate video games day announcing a brand new game called DeChapas, developed by the asturian studio of Bigtree Games and that will be published by Okinaki. Available next 31th of August through Apple Store and Google Play Store for you android and ios devices.

TheToonPlanet has collaborated closely designing graphic user interface improvements and new menus, their online marketing art elements such as banners and teasers for Google Play and App Store and also brand new song as the soundtrack of the video game.

Here you can watch the teaser of the game: 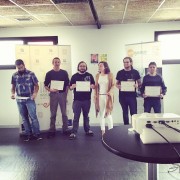 Healthy Child is the winner in the Asturias Game Jam II

No images available at the moment

Stay Tooned!
Healthy Child is the winner in the Asturias Game Jam II